John Butts joined the National Guard in 1939 from his hometown of Medina, New York.  After Butts had completed basic training at Fort McClellan in Alabama, he was assigned to the 2nd Battalion, 108th Infantry.  In October 1940, his unit was federalized for service in the regular army.  Butts' first location assignment was to Hawaii in February 1942, just a few months after Pearl Harbor.  He returned to the States to attend Officer Candidate School at Fort Benning, Georgia, in November 1942.  After graduating, Butts was commissioned as a Second Lieutenant (2nd Lt.).  At age 19, he was one of the youngest commissioned officers in the army at that time.  As he had requested, Bush was sent overseas for duty in the early months of 1943.  Starting with the North Africa Campaign, Butts made his way north with the invasion of Sicily, and a little bit of the Italian Campaign before being transferred to England in October 1943 to prepare for the invasion of Normandy, France.  Though Butts was not among the first swathe of troops who waded ashore on June 6th, it was not long after that he walked onto Utah Beach with Company E of the 60th Infantry Regiment, 2nd Battalion, 9th Infantry Division.

During his time fighting in Normandy, Butts was injured several times.  The first was on June 14, 1944, near Orglandes, quickly followed by an injury sustained on the 16th during an attack while trying to create a bridgehead (fortified position within or near enemy territory) across the Douve River.  Both times, 2nd Lt. Butts refused to get medical treatment and stayed with his platoon.  The next time Butts was wounded was while attacking an important enemy stronghold on a hill near Flottenmanville-Hague, which, if captured, would advance the Allied assault towards Saint Lô, a main objective of the Normandy Invasion.  Although barely a week had passed since he was last injured, Butts did not hesitate as he rushed forward at the front of his platoon into the spray of enemy artillery, machine gun, and mortar fire emitting from various bunkers and nests entrenched on the hill.  Due to his forward position, Butts was soon knocked down by wounds from machine gun fire.  These wounds, however, did not stop him from advancing his company's assault on the hill.  In a quick meeting with his sergeants, Butts sent two squads to flank each side of the hill, while the other squads remained behind in reserve.  Alone, 2nd Lt. Butts continued the advance up the hill, drawing all enemy fire onto himself.  Butts made it within ten yards of the main stronghold on the hill before being killed.  However, the two squads who flanked the hill while Butts was distracting the enemy were able to finish the work he started and captured the stronghold.  For his bravery and unrelenting fortitude despite his injuries, Butts was awarded the Medal of Honor.

Butts was originally buried at a US military cemetery in Normandy, France, but in 1948 was brought back to the US and reinterred at a cemetery in his hometown.

Fort Benning, Georgia, Fort Carson, Colorado, and Fort Dix, New Jersey, all have roads named after 2nd Lt. Butts.  The airfield also at Fort Carson is named the Butts Army Airfield in honor of him.  The American Legion Post in Medina, #204, was renamed to honor both Butts and WWI hero James P. Clark, and is now the Butts-Clark American Legion Post #204. 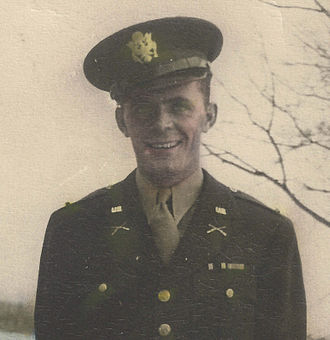